We are excited to announce that our team at National Instruments has been given maintainer privileges to the flot charts github repository. We are looking forward to working with contributors to provide a simple, extensible, high-performance charting package. We have been maintaining a private fork of the flot repository since 2014. Very recently, we merged back our repository into the main flot repository. We took our time integrating these changes and put a high priority on maintaining compatibility whenever feasible. We were successful in many cases, but there are a handful of API changes and features updates. You can see more details in the changelog.

Part of this update to flot incorporated automated testing, builds, and a CI. Our goal is to ensure that the quality of the repository stays consistently high and that changes can be confidently integrated without having unintended consequences to functionality.

In addition, we have updated the way that flot is distributed. We now provide NPM packages for easier inclusion into projects and for easier update workflows.

Our intent is to start accepting pull requests from anyone who wants to contribute. We recognize that there is a significant backlog of pull requests outstanding and we hope to accept some of them along with new requests that are migrated to the new directory structure. Our priority is to accept fixes to known issues and changes that improve compatibility with existing usage. We put a high value on the quality of the project and expect that pull requests will pass tests and include testing for new functionality.

We welcome feedback and look forward to working with you to continue to improve this project.

Resize plugin: Applied fixes to the the inline jQuery Resize plugin to address a regression that resulted in unexpectedly high CPU usage, as well as an error when using older versions of Internet Explorer.

Axes: Fixed regressions related to axis options and ticks, including bugs in the way space was reserved for the first and last tick labels.

See the NEWS file for a complete listing of changes made and bugs fixed.

We’ve released Flot 0.8.2, with patches for many new and long-standing bugs, including the remaining regressions introduced in 0.8. You can download 0.8.2 here.

Tick Labels: Fixed several issues related to axis ticks, including bugs in the way widths were assigned to narrowly-spaced labels, and a change that broke the flot-tickrotor plugin.

Rendering Glitches: Fixed a variety of rendering bugs, including white circles drawn over pie plots, bars not being filled-in on some browsers, and incorrectly-placed highlights when using right-aligned bars.

See the NEWS file for a complete listing of changes made and bugs fixed.

Work on Flot 0.9 has been proceeding slowly but steadily. We’ve continued to clean up the codebase, and have been merging ‘on green’ (in terms of style) for several months now.

Thanks to work by Nick Schonning we now build using Grunt instead of Make. This does add a dependency on node.js, which we previously used only for JSHint, but it gives us flexibility to add things like automatic inlining of third-party dependencies.

Rotated text has been working in the 0.9-work branch for some time now; for example, here’s what the multi-axis example looks like with y-axis labels: 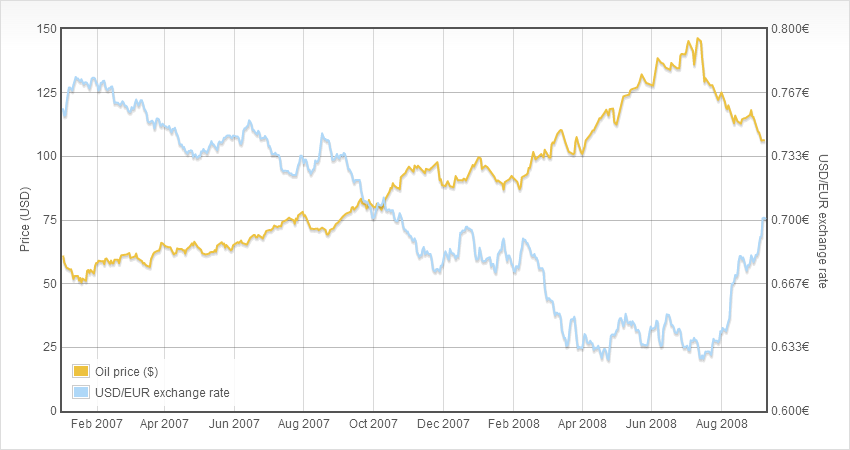 Rotated tick labels still aren’t quite ready yet, but will be soon. The final step is to make this available to plugins, so instead of implementing custom HTML or canvas text you’ll be able to use a simple API from within hooks. The result will automatically render to either HTML or canvas, with styles, and looks almost pixel-identical, even when rotated, on browsers back to IE7.

This week we finished selecting the issues and features that we’ll work on for the 0.9 release. Below is a summary of the main goals, and you can take a look at the full list via the link above. Pay special attention to #9; we’re very interested in community feedback on the best way to implement this plugin mechanism.

If you are interested in contributing to Flot, check out the 0.9 milestone’s list of open issues. Remember to start your work from the 0.9-work branch, and first discuss any larger changes in the issue before implementing them.